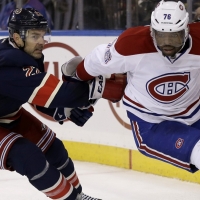 It's often referred to as the world's fastest game, and one of the many facets that makes hockey unique is that you must learn a specific skill - skating - in order to participate in the sport. Several Canadian cities lay claim to being the birthplace of hockey, from Montreal, to Halifax, to Windsor, Nova Scotia, to Kingston, Ontario, and while much research has been devoted to deciphering the answer, no one seems certain as to which claim is legitimate. The first hockey game with official rules was played in Montreal in 1875.  [+]

The Stanley Cup, which goes today to the champion of the National Hockey League, was originally a challenge trophy for amateur clubs put forth by Lord Stanley of Preston, governor-general of Canada, in 1893. American teams eventually got in on the act and in 1916, the Portland Rosebuds were the first U.S.-based team to play in a Stanley Cup final, losing to the Montreal Canadiens in what was the first of a record 24 Stanley Cup wins by the Habs. The following season, the Canadiens were defeated in the Cup final by the Seattle Metropolitans, who became the first American franchise to earn the right to lift Lord Stanley's mug aloft.

Hockey has been contested at the Olympic Games since prior to the birth of the Winter Olympics in 1924. Hockey was included as part of the Summer Olympiad in Belgium in 1920. In 1998, the NHL opted to take a break in the midst of its season so that the best players in the world were free to represent their countries in the Winter Olympics.

In today's goal-starved NHL, betting on the total, or what is more commonly known as the over/under, can prove to be a wise investment. But if you're going to make this play, you'd better know your teams well. [+]

Some teams score goals in bunches, so they are a good over bet. Then there are teams who tend to fish the puck out of their own net with frequency, so betting the over on teams facing these clubs is also smart money.

On the other hand, there are clubs who don't score much but they also don't give up much. Games invovling teams such as these are generally low scoring, so the under is the way to go when they are in action.

How To Win At NHL Betting

How To Win At NHL Betting

The most common method to wager on hockey is via the moneyline. You simply choose whether to back the favorite or the underdog, who are each assigned a number based on a $100 wager.

For example, if the Toronto Maple Leafs are listed at +130, it means they are the underdog and will pay $130 for every $100 wagered. Suppose the Leafs are playing the Montreal Canadiens, and the Habs are priced at -120. That means Montreal is favored and you'd need to wager $120 on the Canadiens to win $100.

Another popular way to bet on hockey is via the puckline. With the puckline, favorites are listed at +1.5, meaning they'd have to win by two goals to pay off, while underdogs are assigned a -1.5 and if they were to lose by less than two goals or win outright, then you would cash.

Combining a moneyline and puckline parlay can prove a lucrative way to make a hockey wager pay handsomely, especially if your plan is to play the favorite.

If you are planning to wager on a prohibitive favorite, the puckline can prove to be the wiser gamble because it will pay off at a higher price than the moneyline.