"How to obtain bonus " block title

Betway is a prime betting destination for UK and European gamblers. It's sign up bonus is simple: bet €30 and get €30. The free bet is valid for 7 days and the bonus must be wagered five times in the sportsbook at odds of 2.0 before any money can be withdrawn. The sign up bonus is restricted to certain European countries.

Since Betway is not open for US players, we encourage you to find another trustable partner to place your bets.

Aside from its sign up bonus, Betway also offers a loyalty program and certain special offers. The loyalty program is dubbed Betway Plus and awards all players, including the sportsbook.

Most sites only offer such programs to poker and casino players, but Betway avoids that route all together. Awards are broken up into tiers based on the game, thus rewards vary a lot.

Players can move from tier to tier by collecting "tokens." Players earn five points for every €10 bet. Plus points can be redeemed for freeplay bonuses. Players will have a challenge ranking from the lowly Blue tier to the chief Prive tier — and the four other tiers between them.

Moreover, Betway is no stranger to handing cash back to its loyal fanbase. Rebates are the norm in soccer, such as 0-0 ties and red card scenarios. Here and there, Betway offers enhanced prices on specific games. The special promotions go quick, so make sure to take advantage in day one before it's gone!

The Betway Group is headquartered in the great Malta country, while it occupies offices in Cape Town, Guernsey, Stockholm, and London, as well.

Licenses currently under Betway's belt include the countries of Malta, Denmark, Spain, and Italy. With seeds planted throughout Europe, Betway supports 15 different languages on its website — a true one-stop shop for European customers. Unfortunately, United States customers are out of luck as Betway doesn't accept American users.

In a past life, Betway was less trusted in gaming circles. However, Betway has slowly improved its reputation. Payments are being done quicker and more consistent than ever. While it's pay rate isn't 100 percent quite yet, it's slowly reaching the mark.

The minimum deposit is €20. Surpisingly, there is no max deposit amount. Betway acceots credit card, debit card, PaySafe card, uKash, NETeller, and Skrill as payment options — a good variety for customers from all areas of the globe. Generally, winnings can be cashed from the same method you initially deposited.

Betway does offer a 24/7 hotline for customer service requests via its live chat feature or phone line. The best part? It's available in a multitude of languages to accomodate all players.

Finding a sport that Betway doesn't offer a line on is like finding a needle in a haystack — and that's no exaggeration! Don't be surprised when you see politics and checkers wagers as well! Betway is not for the faint of heart, hardcore players will love the seemingly endless games, leagues, and bets Betway offers.

Betway is all in on live betting, too. Of course, the more mainstream games will have the most inplay lines, but smaller leagues are not shunned by any means. Live betting is especially useful when you're on the go, which by the way, can be wagered from Betway's official app or their mobile-optimized website!

Betway's poker and casino games are definitely a strong suit of the platform. After receiving a hefty sign up bonus, poker players can toggle between different game types and unique rules. Game modes include 7 Card Stud, Omaha Hi Lo, and more fun options.  The game also offers a fun quickfold option for less patient players to move on from a table quickly.

Meanwhile, the casino has a great blend of games too. Betway features hundreds of seperate three- and five-real slot games. Of course, the classic blackjack, Keno, and video poker is also on the table for players.

And for the old timers, enjoy Betway's take on the classic Bingo game. The game was launched by Betway only a few years ago and has enjoyed some success. Players can toggle between 75- and 95-ball games. Real money prizes are the norm, and there's even a jackpot. Give the classic game a shot and relish in 300 percent welcome bonus up to €150 for first time players. 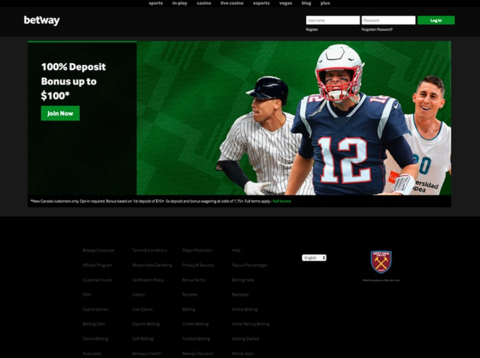