The pop culture event also known as the "Oscars" has come a long way since its inaugural edition held in 1929 at a private dinner before an audience of less than 300. Since that time, the event has morphed into a social happening that both recognizes and defines cinematic excellence.

First held before a live television audience in 1974, millions of viewers annually tune in to watch the proceedings unfold. All of that may be interesting enough, but it also leads us to a bigger question: How can we bet on it?

The online wagering industry may have been driven by sports bettors, but entertainment props have certainly found their way into the mix. In the case of the Academy Awards, it's easy to understand why a significant portion of the estimated 32.9 million live television viewers in 2017 would want to create some additional excitement and adrenaline for themselves while waiting for the awards to be announced. And for those with a strong opinion, making a little extra cash doesn't hurt either. With all of this in mind, most major online betting sites such as Bovada provide plenty of wagering options.

With such an extensive menu of props, let's closer examine a few of the biggies along with the wagering choices.

Best Picture: According to experts, this category is wide-open this year with Get Out(+550), The Shape of Water(+140), Lady Bird (+1400) and Dunkirk (+3300) all chasing Three Billboards Outside Ebbing, Mississippi(-115). If the experts are correct about the "wide-open" part, bettors have to be licking their chops at some of these odds. From my vantage point, The Shape of Water feels like a solid play at +140.

Best Actor: From what I'm hearing, reading and observing at prohibitive odds, Gary Oldman (-2500) is a lock to win this one for his portrayal of Winston Churchill in Darket Hour. After seeing the film, I can't say I walked away totally impressed, but I don't think my critique will have much impact on the vote. Probably safe to keep the wallet in the pocket on this one unless you enjoy laying $2500 to pocket a Benjamin.

Best Documentary Film: While these kind of odds won't seem very appealing for regular sports bettors, Faces Places (-350) is one of the most reasonably-priced favorites of the day. As far as awards go, those who like shoo-ins might be able to get excited about a decent return here.

While probably not the best opportunity to score big cash, the chance to wager on the Academy Awards improves the flavor of the event. As some pundits have pointed out, the unexpected Academy Awards winner has become more frequent in recent years, giving hunch bettors and odds players a reason to take a gamble on a longshot. Tune in to the action on March 4 and throw some bets down. 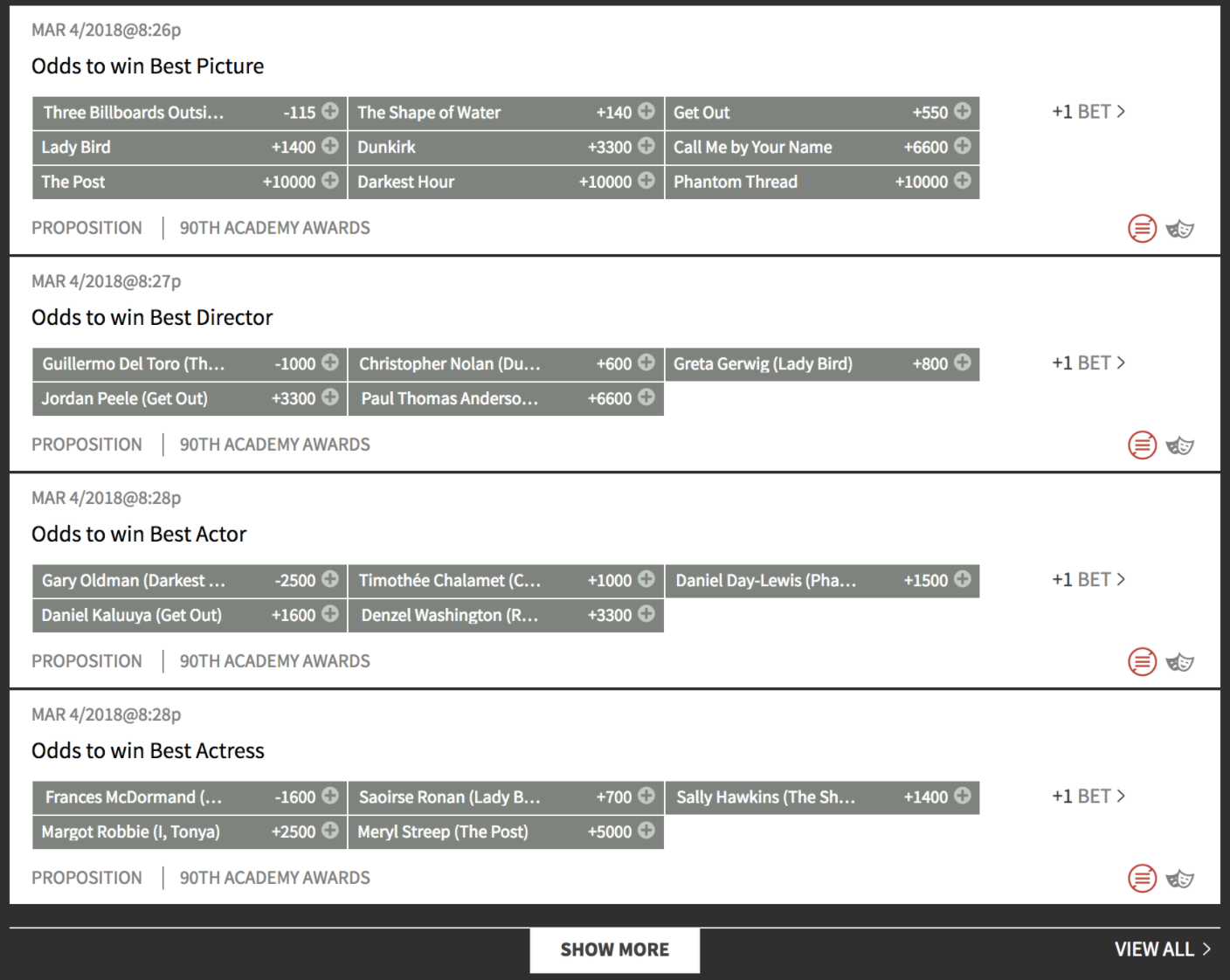 New season, new coach, new quarterback for the Arizona Cardinals who are listed at +800 in the preseason to make the playoffs in 2019. Let's dive into the Cardinals prospects in 2018-19 to determine if there's any betting value in this proposition.

There are plenty of reasons for horse players to be infused with adrenaline with the Keeneland meet starting and the Kentucky Derby just a few weeks away. The 81st running of the Grade 1 Bluegrass Stakes Saturday, April 7 (5:45 ET post) adds another big target for those inclined to bet the ponies.

The winner of the Florida Derby went on to win the Kentucky Derby in 2016 and 2017. One of the 9 runners lined up for the Florida Derby Saturday March 31 (6:36 ET post) will hope recent history repeats itself.

There are few international events in horse racing like the $10 million Dubai World Cup and the 2018 renewal holds plenty of intrigue for bettors of all stripes as a star-studded field of 10 is set to go Saturday, March 31 at 12:50 ET.