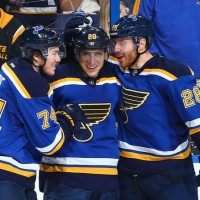 If you're a fan of the St. Louis Blues, you've suffered but at the same time, you finally have to feel good about the future of this team. The Blues are loaded in every department - solid in goal, deep on defense, abundant in every type of forward from high-end skill to gritty, determined checkers, and none of their key components are anywhere near being past their prime. [+]

It won't be an easy feat getting out of the deep Western Conference but the Blues look as good as any team in the group.

If you follow the Blues on a regular basis, you might want to invest in a pair of shades. The future is that bright.

St. Louis has sprung to life and is now one of the best teams in the Central Division. Keep track of the next Blues game and make sure you reference the current betting lines below.

The St. Louis Blues recent results and schedule are available here. With a team as capable of winning on the road as they are at home, the Blues are always a good bet.

These are the St. Louis Blues up to date standings and in the competitive Central Division, the NHL's toughest top to bottom group, every night is a battle for points. [+]

With solid defense, stellar netminding and a balanced attack, the Blues aren't the type of team to suffer through long losing skids, but they are capable of getting on a roll and rattling off lengthy winning streaks.

How To Win At St. Louis Blues Betting

The Blues hold a share of a unique Stanley Cup record. Along with the 1937-38 to 1939-40 Toronto Maple Leafs, St. Louis is one of two teams in NHL history to lose three straight Stanley Cup final series.

When it doubled in size from six to 12 teams, the NHL opted to house all six of its expansion teams in one division and send the winner of that division to the Stanley Cup final. The Blues managed to win the West Division in each of their first three seasons, and thus played in three consecutive Stanley Cup finals.

They remain the only expansion team to reach the Cup final in their first NHL season but it wasn't a pretty picture. St. Louis was swept in all three finals.

Even in the tough NHL Central Division, it's unwise to bet against the St. Louis Blues. They can beat you in so many ways. When their goaltending is on, it's tough to get more than one or two pucks into their net.

And on those rare nights when the Blues struggle to play defense, they've got the depth of scoring to ramp up the attack and run and gun with an opponent. They've also got plenty of grit, so if you want to grind it out, the Blues are down with that gamplean as well.

All great teams need a gamebreaker to be a difference maker in the big games and in right-winger Vladmir Tarasenko, they have that guy. Tarasenko wears No. 91 because his idol growing up was Detroit Red Wings Hall of Famer Sergei Fedorov and like Fedorov, Tarasenko can do it all on the ice.

Don't be surprised if he joins the exclusive 50-goal club before long. This guy is that good.