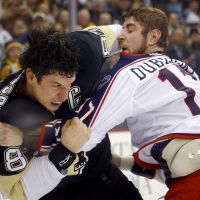 The Eastern Conference is once more a power group after years of taking a back seat to the West. The Pittsburgh Penguins produced back-to-back Stanley Cup titles in 2015-16 and 2016-17, the first time that had happened in nearly a decade. The previous Eastern Conference team to win back-to-back Stanley Cups was also the Penguins in 1990-91 and 1991-92. Yes, the Detroit Red Wings did win consecutive titles in 1996-97 and 1997-98, and four Cups in total between 1997-2008, but all of those were earned while the Wings were still a Western Conference club. [+]

Today's East includes the Metropolitan Division, which may be the NHL's most top to bottom competitive group, and the Atlantic Division, which houses such traditional NHL franchises as the Montreal Canadiens, Toronto Maple Leafs, Boston Bruins and the Wings.

The next match will be displayed here once announced.

Here is where you will find located the NHL Eastern Conference standings. Study them frequently so you can make wise betting decisions down the line.

How To Win At Eastern Conference Betting

The Eastern Conference houses within its ranks the most compelling, most talked-about rivalry in the National Hockey League today - Sidney Crosby of the Pittsburgh Penguins vs. Alex Ovechkin of the Washington Capitals. And if you're betting on this showdown, always play Sid The Kid's side.

The individual recognition each has received over the course of their hockey careers is remarkable and remarkably similar, winning virtually every award imaginable. Both are captains of their respective clubs. Ovechkin was the top player chosen in the 2004 NHL entry draft. The first player chosen in the 2005 entry draft, Crosby owns Ovechkin in head-to-head matchups.

Ovechkin has never bettered Crosby in a Stanley Cup series, but Sid's success over Ovi stems beyond the NHL. Crosby and Canada have toppled Ovechkin and Russia in head-to-head meetings at the world juniors, Winter Olympics, World Cup of Hockey and world championship.