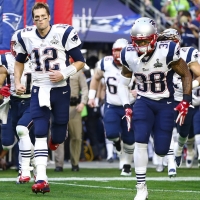 Football historians routinely point to Nov. 6, 1869 as the birthdate of football in the United States. That was the day that Rutgers faced Princeton in the first college football game, although it looked nothing like today's gridiron showdowns, with 20 players on each side of the ball. In 1873, the game evolved even further when rerpesentatives from those two schools, along with Columbia, and Yale met in New York City and put to paper the first set of rules and regulations to govern the game of fooball. [+]

Walter Camp, the coach at Yale, continued the evolutional development of the sport by reducing the players on the field to 11 aside and by 1905, rules were created to govern such modern-day elements of the game as the forward pass, the neutral zone and the length of yards needed to be gained in order to garner a first down.

Football became a popular sports in the U.S. in the late 1800s and it was a major attraction of local athletic clubs throughout the country. Competition between these clubs for top players grew intense.

In 1892, two such Pittsburgh-area outfits - the Alleghany Athletic Association (AAA) and the Pittsburgh Athletic Club (PAC) - set their sights on adding former Yale All-American guard William (Pudge) Heffelfinger to the roster. The PAC offered Heffelfinger $250, which he declined, but he jumped at the chance to take the $500 offered by the AAA and on Nov. 12, 1892, suited up and scored the only touchdown as the AAA defeated the PAC, making Heffelfinger football's first professional player.

A year later, the PAC signed Grant Dilbert to the first season-long pro contract. In 1896, the AAA fielded the first roster comprised entirely of professionals.

Ready to bet? The NFL is the biggest and best league in the world and we have all the betting lines below for your perusal. Reference these lines frequently to get the best returns.

How To Win At Football Betting

Every day during the football season your local newspaper or your favorite sportsbook web site will list the point spreads on NFL games, and while it might look confusing to the novice, point spread wagering is easily deciphered.

By contrast, the Steelers would be considered minus-seven, meaning that they are the favorites to win the game and are expected to win by more than seven points. If you bet on Pittsburgh, the Steelers must cover that point spread and win by a minimum of eight points in order for a wager on Pittsburgh to pay off.

If the Steelers win by exactly seven points that is considered a push and all monies wagered on the game are returned to the bettors.

If you're not a fan of giving up points to bet on a favorite but still would like to play the favorite in an NFL game, then the moneyline is the best bet for you. In moneyline wagering, the favorite is assigned a negative number and the underdog a positive number, both based on a wager of $100 on the game.

A third popular option for betting on football is the over/under, also referred to as the total. Sportsbooks assign a number to each NFL game - say the San Diego Chargers were playing the Oakland Raiders and the number was 48. That means the sportsbooks are setting the total combined points for that game to be 48. If you believe it will be lower, you bet the under. If you think the two teams will score more than 48 points, you play the over.